Last night South Carolina beat UCLA for the College World Series title at Rosenblatt Stadium in Omaha, Nebraska.  For 60 years the College World Series has been played at Rosenblatt and the stadium has been iconically associated with the series.  Next year the games will be played in a new facility in north downtown Omaha.  Although the prospect of newer and bigger can be promising, many, including myself, have fond memories of attending games at Rosenblatt and will miss it.  Last year during the series I captured a panoramic with 2 horizontal images stitched together. Today I present an image from Game 14, played last Saturday – South Carolina vs. Clemson.  This is a panoramic of 4 vertical images stitched together for a 40 megapixel detailed image of that game.  Click here for a larger version that can be used freely as computer wallpaper as long as the copyright stays on the image.  Enjoy the memories! 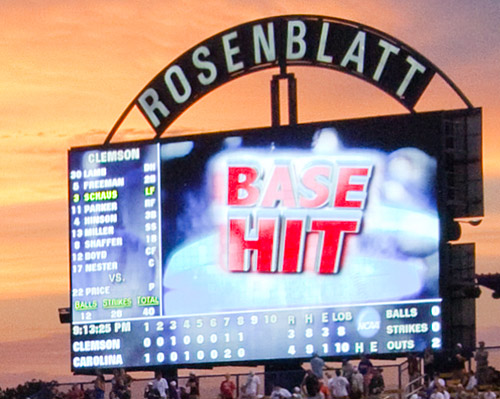 Here is the section with the billboard, reduced in size slightly.

One Response to "Farewell Rosenblatt – A College World Series and Omaha Icon (Computer Wallpaper Too!)"