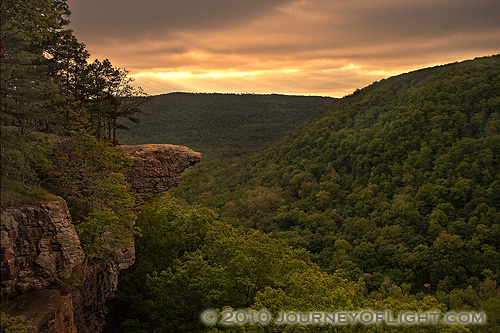 It was a cool, dark morning.  The sun wasn’t due to arrive for another hour and a half.  My drive had been quiet and uneventful save the lone bobcat crossing the dirt road who had stared at me briefly, taunting me, knowing there is no possible way I could capture his image through the blackness.  I arrived at the trail head and gathered my gear, preparing for the hour hike that lay ahead.  I slid my backpack on, grabbed my flashlight, and looked for a box of energy bars that had somehow gone missing in the hour drive.  I paused, I heard something.  A bear?  Elk?  No, it was man-made, it was the sound of an approaching vehicle.  As I looked back down the road, I could see headlights filtering through the trees.  Here I was, in the middle of rural Arkansas, on a less-traveled dirt road, in complete darkness with an unknown individual approaching.  I slammed the door to the car, turned on my flashlight, and quickly began my hike.

“Hello?!” yelled a voice through the early twilight.

I responded with a very apprehensive and much quieter, “Hello.”

“Are you headed to the Crag?” inquired the voice.

With a silent gulp I replied, “Yes.”

“Are you photographing it?”  he asked.

I paused, then replied, “Sure.”

I clenched my tripod closely.  I had always believed that I could use it as a weapon in an intense situation, but In my overactive imagination it was always a protective mama bear or a rabid chipmunk.  I returned to the trail head.  I shone my flashlight rudely in his face.  The stranger didn’t look too menacing.  He extended his hand, “I’m Gale, nice to meet you” he said in a southern accent.

“Let me grab my stuff.”  Gale quickly gathered his equipment and put on his headlamp, “Let’s go!”

I began walking back to where I had begun my hike.  “No, the trail’s over here,” he said as he pointed to a large boulder emblazoned with a plaque.

Even though I had scouted the trail head the day before, I had found the wrong trail to follow.  “Great, I was going to go down the wrong path!” I told him.  His only reply was a quiet chuckle.  He fiddled with his headlamp, unable to get much light from it.

“It looks like my light is dead,” he said.  I guess we needed each other for this journey, I was lost and Gale was blind.

We began trudging through the woods and talking.  We spoke of photography equipment and past photo trips.  We conversed about fellow artists and filters.  It only seemed like ten minutes and he proclaimed, “We’re close!”  Funny, it seemed so dark still, and I thought for sure the hike would take an hour.  “It went fast because we were talking,” he added.

As we rounded a corner he began telling me the story that was all the news the week prior.  “A Kansas man was down here hiking with his family.  He stepped on a rock and slipped and fell to his death.  He didn’t actually fall from the Crag, but I’ll show you the spot.”  Within two minutes we arrived at the infamous ledge.  It was a common feature, really, charcoal black and not incredibly small.  The feature it possessed though, that had probably made it a weapon of death, was it’s unassuming decline into the valley.  I could see how someone would mistakenly think it would be a good place to take in the surrounding view.

“That’s not where we photograph, that’s up here,” Gale wrenched me from my thoughts.  We walked another 100 feet and I saw Hawksbill Crag protruding from the hillside, “Here’s where we want to be.”  A small area that consisted of a couple of trees and a lack of vegetation marked where so many before me had placed their tripod.  I was hoping to get a unique view of the Crag.  Something different.  I quickly saw why it was the coveted location.

I setup my tripod, leaving a good sized tree between me and the valley below.  I mounted my camera, all the while a picture of a man, broken, bloodied, and dead, lying at the bottom of the cliff, dominated my mind.

“It’s still too dark,” I mentioned, “It’s going to be overcast.”

“I checked the radar before I left and it looked like the front should have passed,” Gale replied, “I actually thought it would be completely clear.”

Of course, we desired neither, we both wanted some broken up clouds to lazily float by with the sun adding it’s brilliant warmth.  All we had was a carpet of gray above us.

Slowly, ambient light began to illuminate more of the valley.  A bird chirped repeatedly in the distance.  The clouds began to get some texture so I tried one filter and then another to accentuate the shades and contrast.  Gale went to work creating a multi-image panorama for a client.

“I can take your photo on the Crag if you like,” Gale said.  I paused, I really didn’t want to add a Nebraska man to the death toll.  “It’s a pretty big surface, you’ll be fine,” Gale added.

I headed over to the Crag and looked, the area was quite large.  From all the photos of the side view, one might not realize it.  I stood looking out at the valley in all directions.  As Gale snapped my portrait, I breathed in the cool air and watched the clouds flow away.  To my right the valley zigged and zagged between round hills canvased in verdant trees.  To my left a single hill rose and dominated the horizon.  As I gazed easterly, a ray of sun finally burst through with force through a small opening in the clouds, almost as water would through a hole of a dam.  Then another ray.  I ran back to my camera and Gale and I vigorously snapped a few shots.  It was only about two minutes and then the clouds, with an almost human malevolence, closed the holes and we were again left with the unbroken ceiling.

“But it was worth waiting for,” he replied.

We packed up our gear and began our ascent back to our cars.  It wasn’t the glorious sunrise for which we had hoped, but it was still magnificent to see.  I had my image of Hawksbill Crag to add to the pile of existing images from others, but it was my shot and a memento of my hike.  As we approached our cars, Gale and I shook hands, exchange cards and parted ways.  I drove back down the dirt road, my thoughts my passenger and I pondered, “Where is that bobcat?”

7 Responses to "A Story From the Field: Illumination at Whitaker Point (Hawksbill Crag)"